Tyson Fury’s ongoing arbitration with Deontay Wilder remains ‘a problem’ but promoters are optimistic that an undisputed world title fight will not be delayed.

Anthony Joshua held a meeting with Matchroom boss Eddie Hearn last week to finalise the remaining terms for a fight against Fury, with all the world heavyweight titles at stake.

But Sky Sports understands that Wilder’s arbitration with Fury is still at the preliminary stages as the American stakes his claim for a third WBC title fight following his stoppage loss last February.

Hey @Tyson_Fury ,
Don’t worry about me I am Fine, Blessed.
The only thing I want from you is for you to honor your agreement and fight me. I gave you 2 shots when I didn’t have to and it changed your life. Now it is time for you to be a man and give me my shot as you agreed to.

“We’ve been assured by them, that’s not going to be an issue in making this fight. 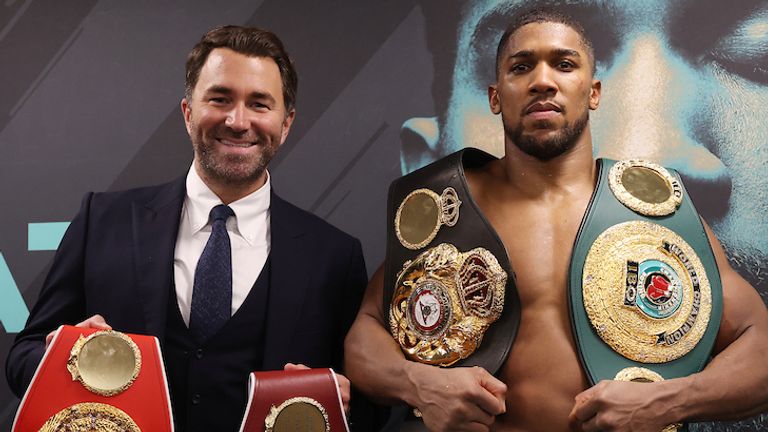 That’s a Fury problem, a Team Fury problem. We’re confident that it won’t impact our fight, or the announcement.

“I do believe that Deontay Wilder, h e was supposed to be fighting in January. Now we’re middle of February, so how much longer is he going to wait? He’s been out of the ring for a year now, and he’s slowly imploding in every single interview that he gives. He should get back in the ring.

“That’s a Fury problem, a Team Fury problem. We’re confident that it won’t impact our fight, or the announcement.

“I keep saying two weeks (until an announcement). I’m bored of saying it now. People are bored of probably hearing it, but we are finalising the finest details of the contract and hope to make an announcement soon.”

Fury’s UK promoter Frank Warren is also hopeful that the Joshua fight will go ahead as planned.

“We don’t believe it will affect the fight,” Warren told Sky Sports.

Wilder’s management and Top Rank, Fury’s US promotional team, did not comment on the ongoing arbitration.

Hearn is confident that he can agree all the terms relating to Joshua, then he plans to select the venue, with Saudi Arabia, America and Singapore among the locations being considered.

“Contracts have been backwards and forwards,” Hearn had told Sky Sports last week.

“Only minor details to be resolved on both ends. We’re in a good place.

“AJ was in the office yesterday with us. We had a good meeting to finalise our side of stuff.

“We’re on the verge now of getting this fight done. We want to make sure the ink is dry, and then we’ll go out and finalise the site details.

“I’m going to keep quiet for now, which probably won’t last for too long, but in the meantime working hard to finalise what is the absolute biggest fight in boxing.”

Other posts by author

lotsofsports.com gives you all the breaking news in the most sports all over the world. The website is your choice for comprehensive news on football, boxing, basketball, athletics, tennis, golf, motor racing etc.